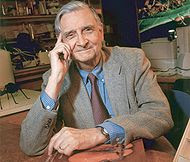 In a tone of what what can only be called mutual admiration, the sociobiologist and the gamebuilder met. The friendly exchange was predictable, even familial, but their conversation on NPR is likely to please only the already persuaded.

Will Wright (of Sims fame) first asked Wilson for an opinion on the standing of games in Wilson's world. The response was ""I'll go to an even more radical position. I think games are the future in education. We're going through a rapid transition now. We're about to leave print and textbooks behind."

This may be so, but there are many questions those more steeped in the intersection of virtual worlds and eLearning would like to have asked. Admittedly, those with more experience generally do not have the standing of either the interviewer nor the interviewer in this case, and it is perhaps doubtful that an above-average NPR journalist would have probed further. Yet it might have been enlightening to hear Wilson consider the "edutainment" conundum, or consider mixed effectiveness outcomes from virtual world learning experiments. And then there is the troubling drift away from written and toward video narratives; today's young person may not be exposed to National Geographic -- even through its online presence, the journal which inspired a young Wilson. [While we're on the subject, for a recent National Geographic Digital Media project, check out the "Infinite Photograph"].

That said, Wilson's belief that virtual worlds are potential "steppingstones" to science's real worlds for young persons seems unassailable. His thoughts on uniting the humanities and the sciences are also worth hearing again, even in this slight form.

Posted by knowlengr at 8:44 PM